Kelly's (also known as Kelly's Diner) is the local diner and boarding house in Port Charles.

Kelly's was introduced in 1980 as a waterfront diner that also features boarding rooms upstairs. Founded originally by Paddy Kelly and his wife Rose, Kelly's quickly became a popular meeting place for the people of Port Charles. Not long after opening, Rose hired Luke Spencer as a waiter for the diner.

Some years after Paddy was killed during an incident with the mob, Rose left town to be with her stepson and sold Kelly's to Ruby Anderson, who became known for her sage advice and famous chili.

In 1984, the bankrupt Quartermaines took residence at Kelly's much to Edward's dismay. While working and living at the diner, Lila Quartermaine creates a new business called Pickle-Lila to build the Quartermaines fortune back. 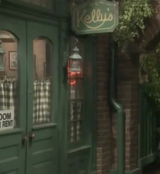 In 1990, Kelly's received a slight makeover and was updated with a red neon sign in the window, while the entrance was moved to the east side of the diner.

In 1992, Jagger Cates and some other gang members broke into Kelly's and roughed up Ruby. Ruby later forgave Jagger for his part in the robbery and even helped him get back on his feet, by offering him the room above Kelly's and a job. Ruby also grants Jagger and Karen Wexler permission to hold their wedding at Kelly's, where many Port Charles guest attended.

When Ruby passed away in 1999, she left Kelly's in the hands of her niece and nephew, Luke and Bobbie Spencer. Luke found it especially difficult to keep Kelly's afloat without Ruby.

On New Year's Eve 2002, Carly Corinthos and Ric Lansing discovered the remnants of a 1920's speakeasy called “The Flynn’s Club”, bricked off in the basement of Kelly’s. Carly later ran a club here for a few years and named it The Cellar.

In February of 2004, Luke and Bobbie hired Mike Corbin to run and live above Kelly's. Mike became known for giving his advice much like in the way of Ruby, and his chocolate chip cookies. Some months after taking over Kelly's, Mike was attacked outside the diner by two thugs attempting to send a message to his son Sonny Corinthos. Mike was quickly rescued by Sam McCall who in turn was attacked instead. Sam was later saved by Emily Quartermaine who held the thugs at gun point.

When the Russian mob invaded Port Charles in 2008, two mobsters break into Kelly's, assault Mike, then set the place ablaze fueling a mob war involving Sonny Corinthos. Not long after Mike recovered, Bobbie and Luke quickly made plans to rebuild the diner.

In 2010, Mike leaves Kelly's to go to gambling rehab forcing Luke to once again step in as manager. Luke often employs his daughter Lulu to help out the family business with Lulu showing little interest.

In February 2012, Shawn Butler was hired as the new manager. Not long after taking over Shawn found TJ Ashford breaking into Kelly's and stealing food. He then took TJ under his wing and gave him a job and room at the diner.

Later that year Luke was especially displeased when Heather Webber was released from Ferncliff and forced Luke to employ her at Kelly's where she was known for expressing her fondness of their BLT sandwiches. However this was short lived as Heather proved to still be mentally unstable.

As of 2013, it seems Kelly's has been given a make over with new neon lights and green paint.

After Shawn was sentenced to jail in 2015, it has become unclear who now manages Kelly's.

In 2016, Kelly's had another attempted armed robbery, this time the culprit was subdued by Curtis and Jordan Ashford.

Retrieved from "https://general-hospital.fandom.com/wiki/Kelly%27s?oldid=170492"
Community content is available under CC-BY-SA unless otherwise noted.